Scott Leon has worked with my Son TJ since he was 12 years old with pitching and hitting and continued to work with him during his High School Days and College Recruiting Days.   Scott is a true professional and person we consider not only  a great coach but a personal friend who always had my son’s best interest in mind.

It’s Fred Siegele, Dominic’s dad.  I wanted to let you know that I moved with the family to Albuquerque this past July.  Cynthia and I became tired of the traffic and diminishing lifestyle for us and the family in Austin.  We were spending so much time in traffic every day that it really started to affect our wellbeing.   We were going to have to move out of downtown back to Westlake so Dominic could go to Westlake High next year, but when we started looking at houses we couldn’t believe how expensive the area had become.

Dominic is attending this awesome private school called Albuquerque Academy, which runs 6th-12th grade.  Their academics are quite strong and the baseball team is pretty good.  He’s playing select ball for the top level team at Albuquerque Baseball Academy (ABA).  It’s run by a guy named Ryan Brewer who played at Texas Tech a while back.  They do a good job developing players and getting them into college programs.  There’s a good amount of travel to tournaments out of state once the kids are high school age to get them seen and get competition.  But, I was happy to see the skill of the players here is at least as high as central Texas.  Alex Bregman came out of ABA and also played at Dominic’s school, so they must be doing something right.  Dominic is continuing to pitch, he’s their top 1st baseman, and he’s getting some time at 3rd base.  He’s hitting in the top 4 spots of the order.  He's almost 6 feet tall.

I want to thank you for all the instruction and guidance you provided Dominic and me over the past five years.  We moved teams every season while in Austin, but you and Boom always provided the best instruction and learning environment.  Both Dominic and I look back fondly of his playing his first season of select ball at 10u with Boom and the lessons he took with you over the years.  I was happy to see that you fielded two 13u teams last spring, and Bill Cox’s team was very competitive.  There is so much turmoil in central Texas select baseball, it is nice that you offer a consistent positive learning environment.  Best of luck to you and Boom, Scott.  Take a look at the attached pic, Dom is still getting good use out of his Boom gear! 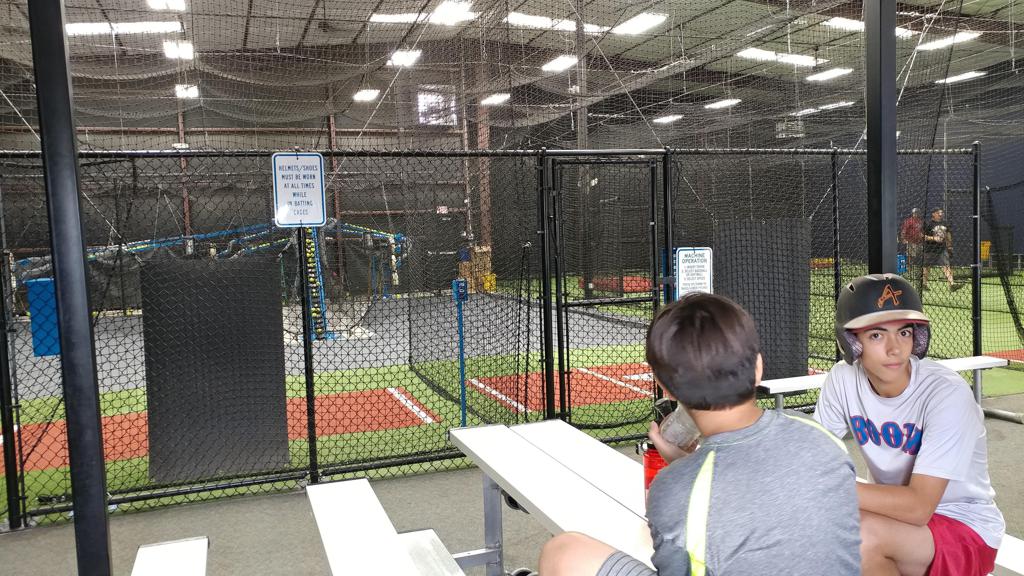 Daniel started pitching lessons with Scott at age 11. Scott taught Daniel weekly to “pitch” not just throw.  Scott taught both the physical and mental approach to the game which gave him the “intangible” aspects that college coaches are looking for. The weekly lessons for years and playing for Scott and the Ridgebacks helped Daniel attain the highest level of play at High School and now at the College level.  Coaches at the college level have commented that Daniel’s mechanics are sound and he has never had arm problems.  We thank Scott and Erin for their help. The time and money spent over the years is “priceless”.  Daniel was named in the top 10 pitchers in the country for Division I baseball in 2012 and is now one of the top pitching prospects in the Houston Astros organization.

Thank you for everything you have done for me, whether it was helping me become a better baseball player or just giving me advice in general. I started coming to your place when I was 8 years old and don’t regret a day of it because it helped me become the player and person that I am today. You and Erin have been a great help to me growing up and I appreciate every bit of it. You have influenced my life and career a great amount and it would have been hard making it to where I am without your help. I am very thankful that you have shared all different types of experience with me to help guide my career in the right path. I also thank you for letting me come to each one of your workout places where ever they might have been as well as meeting me at different locations just to give me lessons. I am very glad that I was introduced to you and couldn’t see myself where I am today without that happening. Once again thank you for everything you have done for me and I wish you all the luck with whatever life may bring in the future.

Sincerely,
Brad Dydalewicz,
Lake Travis High & Houston Astro
Scott,
Now that the Spring season is over, we wanted to drop a note and say that Nathan had a great experience.  He learned a lot this season and certainly the hitting lessons with you improved his performance at the plate 10 fold.  Shauna and I know that his involvement with Slam and Premiere baseball will benefit him significantly as he tries out for his high school at Vandegrift next January.  Thanks to you and the staff there for helping him achieve his next goal.
Thanks,
Dan Upp
Scott and Staff,
We thought you guys did a great job with the boys this Fall and we are thrilled with the progress Thomas has made.  Changing clubs is not without risk but we are very happy with what we experienced and would do it all over again given the chance.  All of your coaches really seemed to be plugged into the boys at this age - able to communicate well, etc - but Nick really left an impression on Thomas.  So much so Thomas commented in the car ride home Sunday (and that in and of itself is unusual) that Nick has been his best coach ever.  Now I am sure he meant to say "after you dad" so you can consider Nick Thomas' second best coach ever!
What really impressed him about his style, and yours Scott, is the "coaching" that happens between innings or in the dugout - and the lack of yelling at the kids in the middle of a game to point out errors and the like.  We subscribe to the philosophy that practice is for practicing, and games are to see what they have retained.  You guys have done a great job here.
You may mention this to Nick if you like, but I already gave him my thanks in person Sunday afternoon.
Thanks for all the work and sacrifice for the sake of the kids.
Bill and Christy.
Scott,

The name Positive Baseball is really key.  George and I were talking when we got home how we thought Phillip would never play again after coming off of a season last year where his confidence was totally crushed by his coaches.  It’s been so nice to hear him laugh and be excited after a game win or lose.    He has his confidence back and we truly appreciate the philosophy you have with your organization.  Sean never had coaches that crushed his spirit but Phillip did for 2 seasons and it was heartbreaking.  We just want to say thanks for helping prove to Phillip that he can play ball.

I just wanted to say thank you for everything you did for Lawrence.  He is doing very well on his incoming freshman summer team.  Several parents that had not seen him play since his 13U season commented on his improvement.  I gave you all the credit!  Thanks again!

Once again I wanted to thank you for all that you have done for Ian.  He definitely improved in all aspects of his game over the last 2 years while in your program.  I believe the reason for his improvement is a direct result of your knowledge, attitude, and how you not allow gain the respect of the kids playing for you but, also due to the fact that you treat them with the same respect you expect from them.

Talk to you soon,

We thoroughly enjoyed our time with you guys and I wish it could have gone on forever.  (I need to adopt a kid and start over again).  David learned some valuable life lessons from Scott and I know he had many great memories playing with PBD.  You guys run a wonderful program that teaches kids how to both play and respect the game of baseball and how to live the game of life.

As luck would have it, David ended up as a starting varsity linebacker for two years at Dripping Springs High School and was a senior team captain last year.  Furthermore, he received the defensive player of the year award, All District honorable mention and was First Team Academic All State.  More importantly, David is a National Merit Scholar Finalist and will study Aerospace Engineering at Texas A&M.  We are very proud of David and I know you guys are as well.  I feel his experiences at PBD played a part in helping David become the young man he is today.

Thank you very much,

Thank you for a wonderful season - we are so proud off all the kid's accomplishments.

There was not one time during the entire season of practices, games, or tournaments that the PBD coaching staff was not constructive and positive with the kids.  It was really refreshing to watch how each of you always found a way to turn a mistake or bad choice into a positive teaching moment.

We are so prod that Zach could be a part - thank you!

I wanted to thank you for allowing Griffin on your 12U Boom team.  I know he is a bit of a project to get to the skill/talent level akin to the rest of the team.  We recognize this is a wonderful opportunity for him and he is absolutely loving every moment of being a part of your program.   He has always enjoyed baseball but his love of the game this year is way beyond anything I have ever witnessed before.  His improvement and confidence has been dramatic  and as a parent we couldn’t have asked for more from you and your coaches.  Bill and Derek are  great coaches and you should be proud of how they represent PBD.  Getting strong employees like that is half the battle in owning your own business.  Bill is not only a great baseball coach from a technical perspective, he does an amazing job of referencing leadership, camaraderie, teamwork and the types of traits a boy has to develop to turn him into a man.

Again, thank you for the opportunity to be on the Boom and special thanks for all that you all have done for Griffin in such a short period of time.